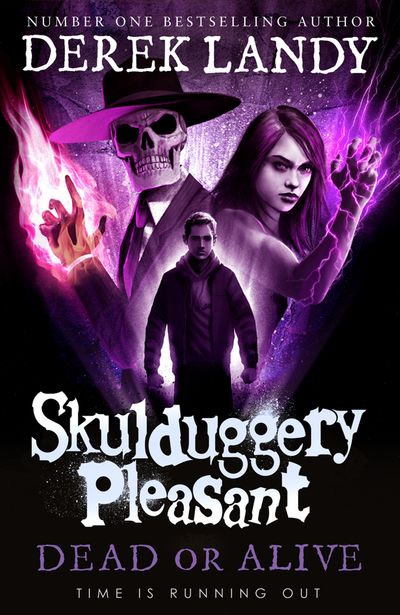 Skulduggery, Valkyrie and Omen return in the 14th and penultimate novel in the internationally bestselling Skulduggery Pleasant series – and their most epic test yet…

In a matter of days, the world will change.

Billions of lives will be wiped away in a final, desperate search for the Child of the Faceless Ones — she who is destined to bring about the return of humankind’s ancient overlords.

To prevent this, Skulduggery Pleasant and Valkyrie Cain have one last – terrible – option: the assassination of Damocles Creed. With protests stirring in the magical city of Roarhaven, with riots and revolutions on the horizon, Valkyrie must decide who she wants to be: the hero who risks everything for a noble ideal, or the killer who sacrifices her own soul for the fate of humanity.

The decision must be made, and time is running out.

Author: Derek Landy
Format: Hardback
Ageband: 11 to 14
Release Date: 01/04/2021
Pages: 608
ISBN: 978-0-00-838629-0
Derek Landy lives near Dublin. Before writing his children's story about a sharply-dressed skeleton detective, he wrote the screenplays for a zombie movie and a murderous horror film. "I think my career-guidance teacher is spinning in her grave," he says, "or she would be if she were dead."

Skulduggery, Valkyrie and Omen return in the 14th and penultimate novel in the internationally bestselling Skulduggery Pleasant series – and their most epic test yet…