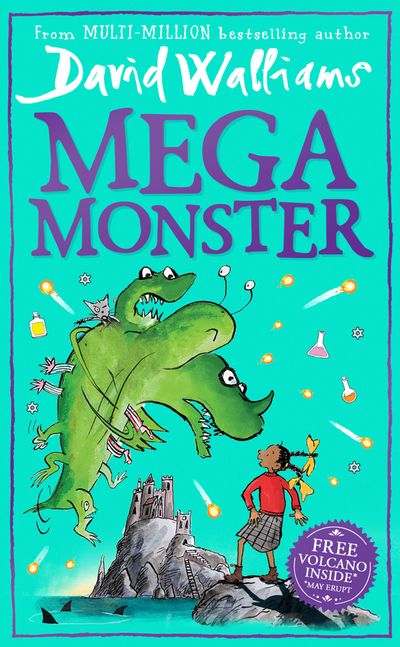 On a volcanic island, in the middle of shark-infested waters, stands The Cruel School. The lessons are appalling, the school dinners are revolting and the teachers are terrifying – especially the mysterious Science teacher Doctor Doktur.

When Larker is sent to the school, she quickly realises something very odd is going on… something involving Doctor Doktur, a pair of strange spectacles, and a ‘Monsterfication Machine’. And ultimately she finds herself face to face with a real life Megamonster.

There seems to be no escape – but for Larker, nothing is impossible…

Author: David Walliams, Illustrated by Tony Ross
Format: Hardback
Ageband: 8 to 12
Release Date: 24/06/2021
Pages: 384
ISBN: 978-0-00-848759-1
David Walliams has revolutionised reading for children and has become one of the most influential children’s writers today. Since the publication of his ground-breaking first novel, The Boy in the Dress (2008), Walliams has seen unprecedented growth with global sales exceeding 45 million copies, and his books translated into 55 languages. Collectively across his titles, David has celebrated 70 weeks (non-consecutive) at number one in the overall book charts and more than 200 weeks (non-consecutive) at number one in the Children’s charts – an achievement no other children’s writer has reached.Born in London, Tony Ross went to art school in Liverpool. His cartoons have appeared in famous publications the world over. Tony has written over 100 books and illustrated over 2000! David and Tony have worked on seven bestselling picture books together, the World’s Worst series of story collections and 16 phenomenally successful novels.